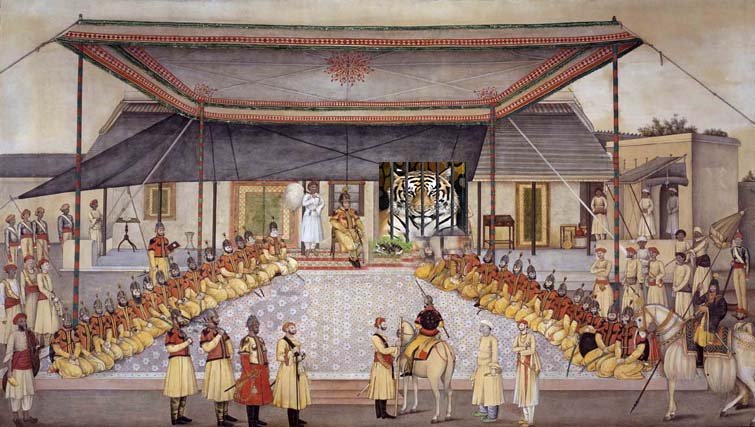 Up went the gate of the iron cage. The awe-striking giant tiger stepped out silently while panning its eyes on the whole audience sitting in the vast royal hall.

John and James were seated next to each other in the front row. The tiger approached them.

This is Lord’s court. Here all are subjects but Him.

Subjects remain present in the court with a sense of uncertainty of tiger’s choice and their helplessness which is subtly betrayed on their face.

Lord is seated in His ornate throne with a plump fawn snuggles down on a cozy velvet mat by His side, chewing tender blades of fresh green grass.

Any time of every day and night, the ever hungry tiger of Lord swoops on people at will and eat them fully or partially. Very enigmatic is the tiger- there is no way to foresee his choice of target; gender or age, near or far or to understand whether it is hungry or not.

Lord sits in His throne every day as per His schedule and all have to remain present in His court to be chosen by the tiger as its meal. The tiger is caged right beside Him.

This is the rule of this empire.

The gate goes up on squeaking roller as per tacit inkling of Lord for the tiger to emerge.

Slowly, the tiger strolls out in a regal gait. It pans its piercing eyes all over and then swoops on the audience, sometimes stealthily and sometimes openly, sometimes taking one, sometimes many at a time.

There are occasions when the prey escapes injured or even unhurt miraculously, people call it luck.

This is the game of Lord. All powerful Lord plays His game regardless to the liking or disliking of the subjects. To live in His Empire, one has to participate in this game willy-nilly.

Like all others, John and James also knew about the tiger. But they never confronted the tiger from so close range.

They cringed in fear and tried to shrink to pose a very insignificant target to avoid being the cynosure of the tiger.

The tiger paced a bit forward.

James got so frightened that he jumped up from his seat. That caused the fawn also to jump up in panic.

By that time John and James were well within the swooping range of the tiger’s paw- real face to face with Yamaduta, the messenger of death.

But the destiny showed his power. Having failed to hold its temptation of the sight of plum fawn, the tiger swooped on the fawn, broke its tender neck and turned back to the cage with the kill.

The courtiers got furious at the untimely demise of the fawn. Lord’s guard arrested James and put him into the jail.

-He would be surely jailed for life. All commented in chorus.

John has lapsed into a state of total bewilderment at the unforeseen act of miracle saving his life from sure death.

-Lord’s own hand in guise of fawn saved his life. John thought.

Everything appeared to be supernatural and John himself felt to be superhuman from that moment.

The miraculous incident haunted him all the time. He could not invest his mind elsewhere. A strange feeling of sublimity instilled in John. He started feeling himself a part of nature.

The swaying of leaves in air, calling of birds and animals appeared to be bearing esoteric meaning to John and he mentally fused himself with the nature.

Finally, John estranged himself totally from human society and went to the jungle to be the part of nature.

Initially, John tried to wrap his body with leaves and twigs to be easy with the birds and animals. Ultimately, one day he wrapped up his whole body in deer skin totally hiding his physical human identity and started to lead a life like animals.

To the contrary, James, the wretched one tried to console himself to live in life long incarceration for no crime.

But James could not really bring him up to accept such an unjust judgment.

A deep sense of resentment started piling up in his mind, giving rise to an urge of revenge. His discontentment boiled up and ultimately pushed him out of his own control. Then, one day James escaped the jail by overpowering and killing the guards.

James is an absconder now. Arrest would surely result in death by hanging. So, his life span is directly proportionate with his absconding period.

James conceives a deep sense of guilt for absconding and killing. But whatever he has done is just to save his life and nothing else and he is determined to do whatever it takes him to do to keep his life safe.

To save life, James also has taken shelter in the jungle leaving the civilized world.

As per the caprice of destiny, John and James both had to leave the civilized world and betook to the jungle. Now, none of them give attendance in Lord’s court to become the meal of tiger.

Life has pushed John and James to two extremes of opposite edge of good and bad.

Carnivores hunt for hunger but James in tiger’s clothing hunt to wreak his hatred and wrath. Unlike other hunting animals, James hunt sparing none. James hunt by utilizing his superior intelligence unlike other animals who bank on their instinct. As a result actual tigers cannot cope up with James in hunting. He became a terror to other carnivores.

To the contrary, John in deer’s clothing is innocent not only in look and but also by nature. He does not remain satisfied saving only himself from other hunters but take extra steps to save other animals. Deer only run to save themselves but John leads them to safe pastures and gives early warning to the whole herd for impending danger. Not only with similar looking deer, John keeps friendship with all non-hunting terrestrial ungulates.

John feels heavenly being part of nature. Every now and then John ties twigs and leaves with his horns and keep standing beside trees, birds and flies of different colors perch on his horns taking that to be branches. John closes his eyes in total complacency thinking himself to be part of nature.

That creates an imbalance in the jungle. In one hand, wrong type of herbivores in galore started losing their lives to the contrary, especially deer population increased manifold taxing on available herbs. On the other hand, carnivores started starving to death without being able to catch proper prey owing to the intelligent leadership and unique stratagems of John.

The jungle changed its perennial character of balance. Peace, tranquility and equilibrium took farewell from the jungle. But no one understood the reason. Only John and James remained satisfied by materializing their own dream.

All animals irrespective of herbivores or carnivores, wished to get back to the original character of the jungle.

Cloud gathered at the NW corner. Deep dark was the cloud. Gusty wind spread the cloud all over in no time. Darkness fell on the jungle well before the sun glides to the west. Taking it to be night, all animals started going to their shelters.

But John and James understood that that was not normal evening, but a premonition of a big natural disaster. Panicked they got.

Nature burst out with its full vigor and ferocity. Gusty wind started tearing down everything on its way. Pouring rain started sweeping away everything. Nature was in a frenzy of destruction.

Animal of all stripes started leaving the jungle in herds to take shelter elsewhere.

John and James looked on and thought ‘how fool are the animals, they thought elsewhere in the jungle are free from this disaster’. They shouted at the animals to dissuade but without any avail.

All the animals left the jungle in the darkness without caring about others.

The ruthless acts of nature became distinct as the day broke out. They were startled at the graphic sights. Things were in shamble. Plain lands were all under water only the hill tops stood with head barely sticking out above the water.

John mounted on a floating tree trunk to save his life. Beside him, there stood a fawn. Poor fellow could not accompany his mother may be due to sickness. This is a sign of uniqueness of our Creator, human memory is sticking and enduring unlike animals that is one big aspect which separates human from other livings.

So many years elapsed since John and James are away from habitation. This is the first time since their arrival in the jungle, they started feeling about their own kind in the locality. They shivered in anticipation of the plight of their kith and kin in the locality.

As the floating tree trunk came close to the hill top where James took shelter, both John and the fawn looked at James in Tiger’s clothing and gulped an apprehension that the hungry tiger would definitely swoop on them as they get close.

As the tree trunk got close to the hill top, John suddenly pushed the fawn on to the hill.

The poor fawn accepted his destiny of sure death in the hand of hungry tiger. It started counting the moment with every bit of his fast running heart.

John thought that the hungry tiger would spare him having got the fawn. He heaved a subtle sigh of relief.

James in tiger’s clothing, felt pity at the sight of the fawn- hungry and frightened. To assure the fawn of safety, James increased the distance between him and the fawn by withdrawing as far back as possible.

John and the fawn both got confused at this attitude of the tiger.

Being sure of safety from the tiger, John also alighted from the tree trunk on to the hill top.

The rage of nature subsided gradually. Water started receding, exposing the submerged lands and jungle. A sight of emptiness reigned over all around.

John and James both felt very bad about the plight of the fawn, they expected that some of his own kind would appear soon to be around the waif. The fawn started biting the grass without much concern.

The sense of concern of John and James welled up thinking about the plight of their own kind in the locality. Their present venture appeared to be useless. Human beings are created to commute between two extremities of humanity and animality and not being able to cross either line.

A strange realization dawned on them that they are born to appear in the Lord’s court every day to be the meal of choice for His Majesty’s tiger.

It’s a Lord’s game and they are to participate.

The Boy and the Apple Tree