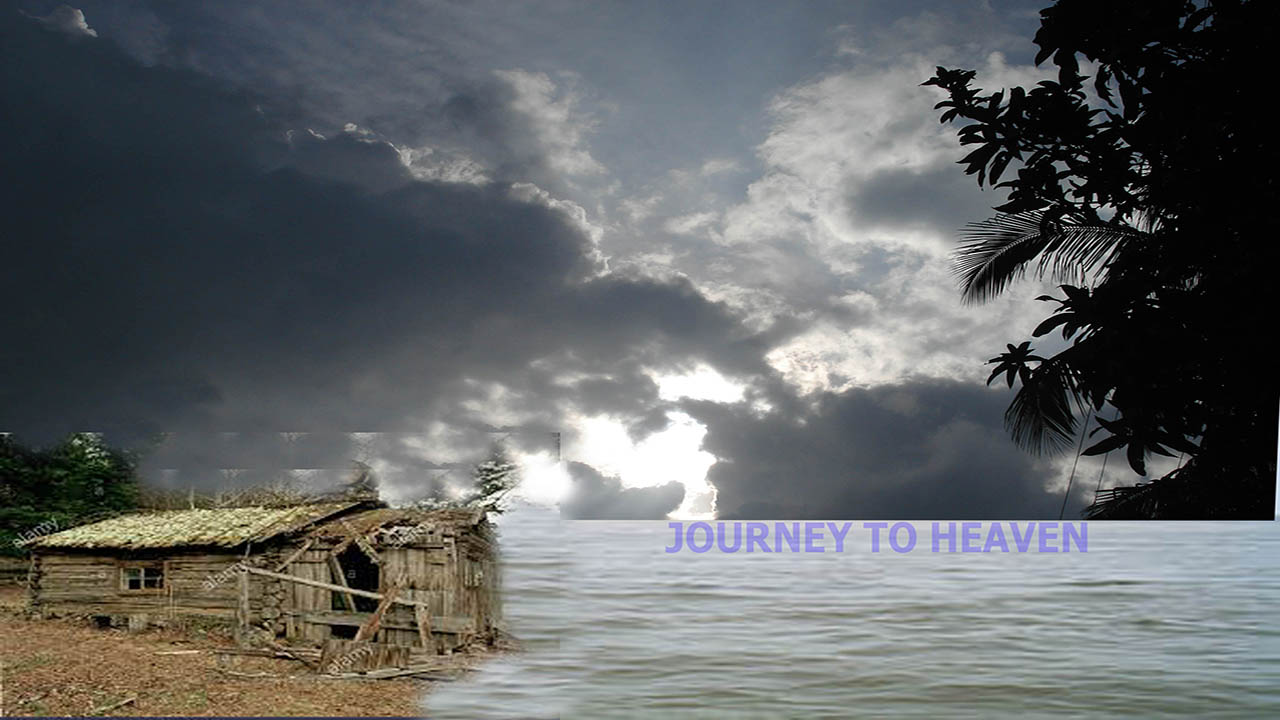 Short Story #Passengers to Heaven# In search for Meaning of Life

All are passengers to heaven. Having traversed a long way they have reached on the bank of the river . Other side is heaven, abode forever. All livings crave and wait for such final crossing.
Passengers are already on home bank and there is no way back from here. All have to go across willy-nilly. All have come prepared in their own way. Once they board on the Ferry, their eternal yearned destination would come into their reach.

Now only wait for the Ferry to arrive. Five passengers all together.
The sun has already crossed the mid line, evening is setting in gradually. Embarkation point is desolate, beside a ramshackle hut nothing else is visible.
All seems bent to bide here after a long and arduous journey for rest of the time as against all odds.
But nature intervened and spiked the plan. Sky got overcast with thunder rumbling, gusty wind started blowing.
Tumultuous nature snubbed all with sparkling teeth as lightening streaked across the sky.

Passengers got in a fix. Only shelter available for protection against fury of elements is the ramshackle hut.
Passengers looked at each other. What to do!

Among the passengers one is a bird lover. He has a pair of owl in a cage. They panned their eyes ogling all around- sky above, river in front, open ground everything, nothing
missed its eyes. It appears that only seeing satiates the mind and body. The caprices of nature made things super natural. The owls seem not to miss any iota of this display of ensemble before final departure.
The owls fluttered and hooted- hoo hoo hooooo as their owner took to his feet lifting the cage for going to the shelter. He entered the hut with his owls.

Second passenger has two rabbits in a hutch. Sitting idle with two ears stuck up and rolling all the time. They also seem to be rapt in listening to everything- soughing of the wind,
the burbling of the river and whatever sound made around. They also got restless as their master lifted the hutch for going to the shelter. But they were undone as they are
totally under control of their master.

Third passenger has a pair of dog with him. They are busy sniffing around relentlessly, as if life is for sniffing. Dogs are known for their unquestionable loyalty. There are a lot of stories about dog giving life in protection of their master. It is very difficult to get a faithful companion like log especially in our old ages. The thundering sound, gusty wind, rain drops etc. nothing could really dissuade them from rapt sniffing. They also left the place very reluctantly at the command of their master.

Only rickety hut. No hope that it would withstand any fury of nature. But since their stay here is for a short period of time just to wait for the arrival of the Ferry, all
acquiesced to tarry for sometime. They looked at each other suspiciously.
All passengers earn their livelihood through different kind of animals as they inherited. The ownership of those animals have been handed down to them through generations.
All have heard about the Ferry but they are not very clear about the time table, space capacity or ticket system etc. They were too busy in taming and fostering the animals to
earn their livelihood than to collect information about the Ferry.
They have been waiting for some time but did not yet get any trace of the Ferry.
-It would do if it comes, no matter when. All thought.
They have taken shelter in this crumbling hut against unwillingness of their animals just biding for the Ferry to arrive.
All felt hesitant about each other silently but their animals rather reacted more sharply. Animals expressed their disliking by fluttering, hooting, barking and making other
peculiar sounds. Their noisy reaction aroused distrust among their masters.
Passengers are helpless but to stay here. They looked through the porous hedge covering of the hut to get a feel of the nature outside.
Thunder rumbled and lightning flickered and snubbed them calm. Having surrendered to the unfaltering wish of nature, they entered into an unwritten agreement of living together
by keeping their sense driven animals as far as possible from each other.
Clouds were consolidating its grab on the sky. Gusty wind was gathering pace with more frequent thundering and lightening.
Four passengers in the hut were squatting cautiously keeping their animals under control.

The fifth passenger was still outside. He arrived last after all others. He is well dressed and seems to be confident about what he is doing.
He was taking a close look at the sky frequently. He was trying to be sure about the impending rain. The sky was completely overcast with black cloud. Darkness has set in well before sun set.

He took a look at his wrist watch with the help of a pencil torch. He seemed to be calculating about the arrival time of the Ferry.
He appeared to be very calculative.
He brought out a rain coat from his side bag as rain drops increased its frequency. He wrapped his body and head meticulously. This passenger has come very well prepared
having done meticulous home work.
It’s very apparent that the only available shelter in this area seems to be way mismatched with his ensemble and with his aesthetic sense. The passenger seems planned to pass his waiting time in the open.
But alas! His accompanying animals expressed discomfort. They are not as timid and small like other animals. He had three huge carnivores of different species. They are
ferocious but he tamed them sufficiently.
One Bear, one Lion and one Tiger. They eat on other animals. They were standing with proper aplomb munching fresh flesh kept in front of them separately
seemingly oblivious to the surroundings. They were making subtle growling sound at each other frequently to show their respective strength. They seemed very hungry and
their master kept enough provisions in view of that.

It started raining. Though their Master remained unmoved but the animals almost revolted. They could somehow withstood drizzling till then as they were busy eating.
But they started fidgeting and switched their steel chain so hard that it was about to uproot the peg with which they were tied.
Fifth passenger also decided to go inside the ramshackle hut very reluctantly in apprehension that the impatience of the animals if turn into ferocity would definitely jeopardize his own safety.
Darkness almost engulfed the area by then.

An over six feet tall skeleton like old man entered the hut with a kerosene lamp. He coughed dry all the time. He was clad with tattered cloth and moved drooping because
of age. He was so emaciated that one can almost see through his body like the ramshackle hut.
He had a quick scan of all passengers holding his lamp up. He introduced himself as petty Watchman. His voice was faint and cracked confusing his distance.
– Don’t you know that weather gets bad to worse after mid-day here? It would get even worst as the sun would set! Watchman gasped out while coughing.
-Why have you brought all those?
He said indicating the animals.
-These are for this side only, don’t have any use on the other side. Watchman uttered in faint cracked voice.
-Though somehow you could accommodate them here but you can’t accommodate them in the Ferry. It is pitch dark there, all have to huddle. No one knows what these animals
would do in darkness.

The fastidious fifth passenger entered along with his animals. The animals were still munching the residual of flesh. The blood stain on their face became distinct as the dim
light from watchman fell on them.
All got a shock.
All passengers along with their animals moved further and huddled in one corner in panic.
The fifth passenger got a bit puzzled at the spectacle. An expression of pity evinced on his face at the plight of the passengers.
His animals also stood startled at first sight. Having had a close look at the skeleton like Watchman, the animals turned towards the huddled human and animals at the corner.
No emotional change was evident on their face unlike their Master. They started munching their flesh after a brief pause.
-It would do somehow on this side, but I told you that you can’t cross over with all those. Try to understand that whatever belong here are obsolete there.
All got back to sense as the Watchman talked. All looked at him. Watchman placed the lamp at the center.
All were roughly visible through light and shadow.
-This frame is the only belonging on this side – temporary abode for all five. Watchman heaved a sigh with cracking sound.
-The cage is an item of this side, it does not have any utility on the other side.
Watchman uttered faintly as he was passing his palm over his skinny body.
-useless, all are useless! Watchman uttered while coughing.
-All are to cram in the Ferry. Animals would be busy biting each other, bigger ones would eat up the smaller ones.
-For human thronging together would be all right, all are same once you close your senses. But you can’t trust the beasts, they would embark on mutual annihilation to give
vent to their wrath and disliking.
All eyes are fixed on the Watchman, listening to him.
-You better go back and come prepared befittingly.
-Useless, all are useless!
The Watchman vanished in the darkness coughing incessantly.